Know the Risks of Nepotism 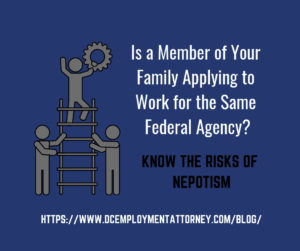 Is a Member of Your Family Applying to Work for the Same Federal Agency?

Do you have a family member who has been asking you to put in a good word for them at your agency?  If so, you need to know the following to protect your job from allegations of nepotism:

In a general sense, nepotism happens when a person uses their power or influence to favor relatives or friends. We see examples of this all the time in the private sector, where it is completely legal, and in fact is often the basis for family-run businesses. However, the federal government is an entirely different animal. The federal government runs efficiently and effectively only if it maintains the public’s trust. In order to keep the public’s trust, the federal government must avoid any appearance of corruption. To ensure that federal hiring is fair and merit-based, federal employees are prohibited from using their position to appoint, employ, promote, advance, or advocate for their relatives.

Who investigates allegations of nepotism?

Is the potential employee a relative of yours?

Nepotism occurs when a federal employee appoints, promotes, advances, or advocates for an individual who is related to them. Relatives include immediate family members, step family members, in-laws, and extended family up to the first cousin. Simply because you have a previous relationship with an applicant does not make you susceptible to charges of nepotism; however, if that applicant is a relative, you could be open to accusations of nepotism.

Have you advocated for your relative?

Nepotism does not occur unless a federal employee commits an “act of advocacy.” For example, writing a letter of commendation to include in a spouse’s personnel file to justify the spouse’s promotion is considered an act of advocacy. Similarly, ordering a subordinate to write a justification letter used to support his child’s appointment is an act of advocacy.

In other words, nepotism requires that you take some deliberate steps to influence the personnel decision. Two relatives working in the same office is not enough—there must be some showing that steps were taken by the federal employee to sway the personnel action (employment, promotion, etc.) in his or her relative’s favor.

What to do when your relative applies for a position in the same agency?

There are a few steps you can follow if a relative is applying to the same agency, in order to avoid allegations of nepotism. First, you should consult with an ethics advisor in your agency, explain your situation, and follow their advice.  Your ethics advisors should be listed on your agency’s website, or Human Resources should be able to direct you to the appropriate official.  Second, you should notify your upper management of any potential conflicts of interest that may be created when a relative applies to work in your agency. Third, you must recuse yourself from any involvement in the hiring process. It is best to protect yourself, and your relative, by remaining in a completely neutral position.