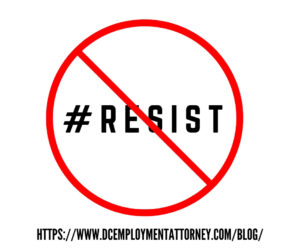 A little-known federal agency, the Office of Special Counsel, recently garnered headlines for pronouncing that federal employees could be disciplined for announcing their support for impeaching President Trump or making statements concerning the “resistance,” or “#resist.”

What about the 1st Amendment?

Free speech is not unlimited for federal employees.

The Hatch Act of 1939 limits the political activities of federal, state, and some local government employees who work in connection with federally funded programs. Among other restrictions, all federal employees are prohibited from engaging in political activity while

What counts as political activity?

What does this mean for federal employee commenting on President Trump?

Now that President Trump is a candidate in the 2020 presidential race, OSC is taking the position that expressing strong criticism or praise of President Trump’s actions in the run-up to the next election, advocating for impeachment, or using the term “resistance,” or “#resist,” in connection with President Trump are prohibited political activities if done while the employee is on duty or otherwise representing the federal government. While OSC’s position is some what dubious under the law, especially regarding impeachment, violating OSC’s instruction could lead to disciplinary proceedings. Accordingly, wise federal employees should resist the urge to #resist at work.

Read more here about how two employees of the Administrative Office of the Courts challenged the Hatch Act.

Read more about the Hatch Act and who is covered by it here.

Read more about how one Florida public employee was disciplined for his social media post.